This wasn’t planned. Nina was 6 years old when we moved to Boston in 2009. She had started to learn to skate already in Germany in the years before. So we thought it would be a good idea to continue this effort. Maybe she could play some hockey some day. Just a bit, once a week, or every other week. Let’s try it. We bought used equipment (you never know if your kids really like it…). She started in the Natick Comets skills program which is designed to prepare kids for the „real“ hockey. I remember telling the coach in the first session that Nina does not understand English, but nobody cared and it didn’t matter at all. She moved quite quickly through the different skills levels. After some weeks we were surprised to hear that the Comets program offered not only skills twice a week, but also a house league for girls and boys who are not (yet) on a travel team. Well, again we thought, let’s try it. It was fun. They played 3 on 3 on small area fields. We heard other parents cheering „Great hustle, Nina!“. 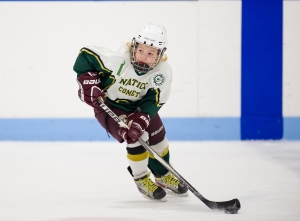 The U-10 Walpole Express defeated the Natick Comets in a shootout after 5 overtimes to win the 2013 William L. Chase Tournament.

At the end of the first season, we were told we should sign-up for „Try-Outs“ for the travel team. After we understood the concept, we faced the question to try out for a mite team (boys 8 and under), or a U10 girls team (Later, in 2014 the organization even started a U8 girls team). Well, we thought, let’s try it and let Nina try out for the girls U10 team. She made it into the team and it was the first of four years of playing with the U10 team. Because of the age difference, the other girls were big at the beginning, but there was always a way to make it through. After four years of playing for the Natick Comets U10 team, she was recognized with the Bobby Orr award, the highest award of Natick Comets youth hockey organization.

In the second U10 year a girl was on the Comets team who played not only for the „town“ team, but also for a „club“ team. What a surprise! Can you really play with two teams? Yes, you can! (Well, later we learned that some girls even play three teams: town team, club team, and middle school team). As Nina liked hockey and I became more and more proud watching my daughter play hockey, we tried out for club teams as well. After the first try-out session, the Boston Junior Eagles offered her a spot on the team. From that year we didn’t need to worry about weekend plans anymore, because the weekends were filled up with 1 to 3 games.

Because of the density of girls hockey teams in the Boston area (there are more than 200 girls teams at U8-U14 levels), traveling to a game took not more than 30-60 minutes. In addition to the 20-30 regular season games, we loved the tournaments. Thanksgiving, Chase Tournament, and State Tournaments. You don’t need to watch NHL hockey if your daughter plays in playoff games with 3 or more overtimes. In one year, both her town team and her club team participated in Thanksgiving tournaments. While the turkey was in the oven, we traveled back and forth between 9 games. I can’t imagine anything more fun than hanging out with a group of awesome parents and girls during a tournament weekend in the same hotel and watch the girls play some fabulous hockey and between the games have fun in and around the hotel pool. Unforgettable also the Massachusetts states tournaments: If you play on two teams, you can even play in two state tournaments (Tier I and Tier III)!  In 2013, the Comets U10 team were the runners-up after a 5 OT win in the semi-finals, and in 2014 Nina’s U10 Jr Eagles team proceeded to the championship game also after a 5 OT semi-finals win. 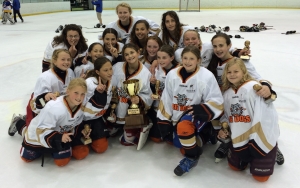 Hockey in North America is a year round sports. Different from Europe, most US rinks are open in summer as well. The icing on the hockey cake is to play in summer tournaments. And setting up a summer team does not need more than some enthusiastic parents. Nina was asked in 2014 if she wanted play for the Big Dogs girls hockey team, a pick of better players from the top teams in the New England Girls Hockey League. The goal of the program is to provide girls with the ability to compete at very high levels of girls youth hockey, introduce the girls to more kids just like them and leave the girls wanting more. Of course, Nina wanted more! We wanted more! The Big Dogs 03 team (with all girls born in 2003) won the Reebock Cup in New Hamphire in 2014, and competed in tournaments in Montreal, New Hampshire and Rochester, NY in 2015.

We are more than grateful for all the love and friendship we have experienced over the years. I have no doubt, the friendships Nina made with other girls will last a lifetime. It is impossible to mention all of the great hockey Moms and Dads we met, but we want to call out some of the coaches: Paul Maxwell, Nina’s first U10 coach. Kim Hyland, the first year coach of the Boston Junior Eagles and John Joyce, her coach in the following years. Mike and Laurie Ensley from the Big Dogs. And finally, a special shoutout to Kevin and Karen Quirk: Kevin was not only Nina’s U10 and U12 coach for several years, the Quirks were throwing a big send-off party for Nina („Ninapalooza“) in their house with all U10, U12, and U14 hockey girls from Natick and their parents (speaking about 100+ people)

What do we take away from living 6 years in Boston? Most important: Girls love to play hockey. They love to have fun, and they love to hang and play with other girls. I believe that German girls deserve as well to have the choice to play hockey with other girls. They would love it. Thinking once again: Let’s try it. Let’s bring girls hockey to Germany! This is the purpose of GirlsEishockey.de.